On the night of June 29, 2012, a line of intense thunderstorms known as a derecho charged across Fairfax County with winds gusting up to 80 mph. The ferocious winds leveled hundreds of trees and left thousands of residents in the dark and without power. Among the trees found in the storm’s wake was a former national champion Virginia pine (pinus virginiana), an impressive specimen that had towered 106 feet above the Reston South Park and Ride lot. Upon learning of the tree’s demise, members of the Fairfax County Tree Commission set out to commemorate the fallen champion.

Robert Vickers, chairman of the tree commission and Dranesville District representative, first noticed the great pine in 2009 while waiting at a traffic light at the corner of Reston Parkway and Lawyers Road. “Once I measured the tree and checked the Virginia Big Tree website, I realized it was the new state champion,” he recalled. The massive tree had an 82-inch circumference and its crown spanned 39 feet. Vickers invited Virginia Tech professor and keeper of the Virginia Big Tree database Jeff Kirwan to confirm the measurements. To their surprise, not only was the giant pine a Virginia state champion but it was the tallest tree of its kind in the country. It was then included in the National Register of Big Trees, a publication produced by American Forests, the country’s oldest nonprofit conservation organization.  Fairfax County was home to the national champion Virginia pine for two years until a larger tree was found in West Virginia in 2011. However, the tree remained the state champion until the powerful derecho uprooted it in 2012.

The fallen giant lay where it fell for more than a year until Vickers shared his story with fellow tree commissioner Jerry Peters, who suggested cutting a few “cookies” or cross sections of the tree to be displayed at various county offices. Luckily, the tree had fallen on parkland and hadn’t caused any property damage, so it had remained untouched since the storm. Peters reached out to the Reston Association for permission to do the cutting and the organization was excited to participate. “The Reston Association was delighted to hear that we had a national champion pine on one of our natural area parcels,” said RA Environmental Resource Manager Claudia Thompson-Deahl. “To think that these champion trees have been around to survive development, disease and storms is quite a feat.”

Meanwhile, recognizing the need for experts with a big saw, Vickers contacted another tree commissioner, Everett “Butch” Loughry, who is also the Fairfax County Park Authority’s forestry crew chief. “Our crew is glad to help surrounding jurisdictions whenever needed,” Loughry said. The four-man crew removed the trunk from the stump to prevent it from rolling and then used a heavy-duty chainsaw to cut five “cookies” on Wednesday, January 8, 2014. Commemorative plaques made from the large wooden discs will be given to the tree commission, the Park Authority, the Reston Association, the Fairfax County Government Center, and Fairfax County Board of Supervisors Chairman Sharon Bulova. According to Vickers, each plaque will list the tree’s official measurements and the years in which the tree was recognized as a state and national champ.

Tree Commissioner Peters counted at least 125 rings on one “cookie,” which means the tree had stood in the same place for parts of three centuries. To put this in perspective, it began growing when the U.S. flag still had only 38 stars and stood sentinel throughout two World Wars, the Space Race, the Civil Rights Movement, and the explosion of technological advances in the first decade of the 21st century. 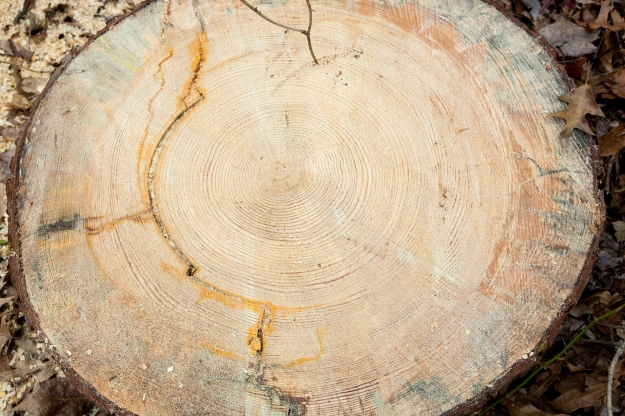 One hundred twenty-five rings were counted in this cross-section of the tree. Photo by Sean Bahrami.

For years Fairfax County boasted three national champion trees. But with the loss of the Virginia pine and the discovery of another tree that dethroned a champion chestnut oak in McLean in 2010, the county is down to one, an ancient paw paw growing along the Potomac River in Great Falls. Let’s hope it can withstand nature’s fury and stand tall long into this century and beyond.