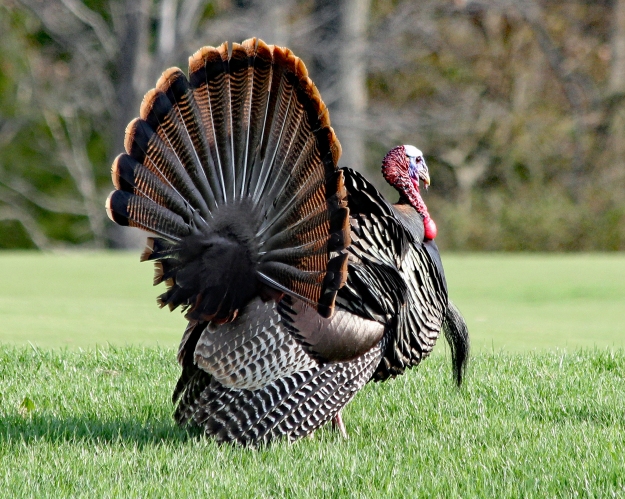 What comes to mind when you think about a Thanksgiving Turkey?

For many of us, it’s that puffed up, iridescent, brownish bird with its tail feather spread into a beautiful, full fan. While an iconic image, it’s the exception, not the rule. What we learned to draw in elementary school is a male turkey struttin’ his stuff to attract a mate and intimidate the competition. In addition to the visual display, they have a range of vocalizations including “gobbles,” “clucks,” “putts,” “purrs,” “yelps,” “cutts,” “whines,” “cackles,” and “kee-kees.” Some of those calls can carry for over a mile. Who knew?

When not showing off, the wild turkey is a long, sleek bird that patrols open woods feasting on nuts, seeds, fruit, bugs, worms and even small lizards. Yes, they are omnivorous. Alert, wily birds with great eyesight, they are always on the lookout and fly up into trees at night to roost out of the reach of predators. Usually walking about to look for food, they do fly well, relatively close to the ground, and for about 100 yards at a time.

Their domestic cousins retain the behaviors and calls but come in a wider range of plumage colors. Frying Pan Farm Park keeps two breeds that were common during the park’s historic period. Back in the 1930s and 40s, the Bourbon Red was the most popular commercial breed. A lovely bird with unique reddish plumage, its tail fan and flight feathers are a striking white. The name Bourbon comes from their area of origin, Bourbon County, Kentucky. The Slate or Blue Slate can have plumage ranging from white to black, but the hen at Frying Pan is a lovely, soft bluish grey. Turkey breeds also come in brown, black, and white. All the poultry you now purchase at stores have all white feathers, including the Broad Breasted White Turkey that dominates the U.S. turkey market.

Visit the gobblers at Frying Pan Farm Park before or after Thanksgiving Day, as they will not end up in the frying pan. Closed on Thanksgiving Day, the farm is free to visit and open all other days from 9 a.m. to 5 p.m. The park grounds are open from sunrise to sunset.