While sharing stories of Richard and Elizabeth Lee with visitors to Sully Historic Site, I’ve become curious about the lives of the Lee children and their descendants.  Using historical resources available online, I’ve discovered a treasury of information.  Particularly notable  is a female descendent whose life reflected the tradition of public service prevalent in the Lee family.

Richard Henry Lee was a Confederate veteran of the Civil War. Historic records show that in the summer of Elizabeth’s birth, he was married and employed as a retail grocery merchant. By 1880, Richard and Isabelle had returned to their hometown of Baltimore, Maryland, and little Elizabeth had two younger brothers, six-year-old Richard Henry and two-month-old Joseph Collins. Elizabeth’s father died when the children were all quite young in March 1883, and they lost their mother nine years later in September 1892.

As a girl, Elizabeth attended the Baltimore Academy of the Visitation, a Catholic school for girls. She graduated in 1896 from the University of Maryland Faculty of Physics Training School for Nurses in Baltimore. Established in 1889, it was one of the nation’s early formal nursing programs and was originally directed by Louisa Parsons, a graduate of the Florence Nightingale Training School.  The school was located at University Hospital at Lombard and Green Streets, the present day location of the University of Maryland Health Sciences Library. Elizabeth also pursued graduate studies at Johns Hopkins in psychiatry, a very new field of medicine at the time.

A 1904 city directory and the 1910 Federal Census both show that Elizabeth was employed as a nurse and living in Baltimore. By 1910, Elizabeth had become the first University of Maryland School of Nursing graduate employed by the Baltimore City Health Department, joining its newly formed Tuberculosis Division. She joined the Red Cross on Nov. 2, 1911, and was later described in a University Hospital article about alumnae as “an ardent suffragist.” 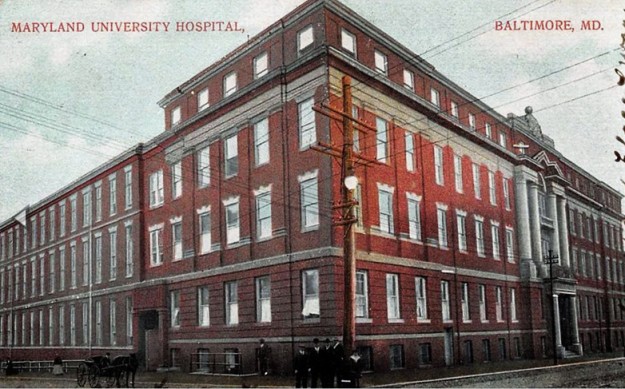 A postcard photo of the Maryland University Hospital, where Elizabeth Collins Lee received her nursing training. It is postmarked from Baltimore, MD on Oct. 6, 1909. The postcard shows details such as utility lines, the tracks on the street, and people in period clothing.

A memorial published about Elizabeth following her death in 1927 described a heroic time for her from 1915 to 1920. In 1915, shortly after the outbreak of World War I, Elizabeth joined the American branch of Queen Mary’s Needlework Guild to provide first aid and emergency services, giving “every moment of her time, and all her strength, — sewing and laboring weekly until she was sent overseas, June 11th, 1918, and after her return, until August 1st, 1920.”

Elizabeth tried to volunteer as a nurse for the British Expeditionary Forces in June 1917, but after receiving all her inoculations and purchasing her own overseas wardrobe, she learned that she had not been selected. However, by May of the following year, she was enlisted in the Army Nurse Corps and was on duty at Base Hospital No. 45 in Blois, France on July 1, 1918.  She volunteered for field service, and on July 15, 1918 was assigned to Evacuation Hospital No. 4 with the 42nd Infantry Division. She remained with them until Dec. 1, 1918, when Evacuation Hospital No. 4 was ordered with the Army of Occupation to Treves, Germany. During its time in France, the 42nd Division participated in six major campaigns and incurred 1-out-of-16 casualties suffered by the American Army during the war.

On Nov. 2, 1918, just days before the Armistice would end fighting on the Western Front, Evacuation Hospital No. 4 was shelled by enemy artillery. Elizabeth was credited with carrying 11 stretchers to ambulances while under fire and helping three other men to safety.  For her bravery, on Dec. 12, 1918, Elizabeth and 38 other nurses with whom she had served received a Citation for Heroic Conduct from the command of U.S. Army General John J. Pershing, Commander of the American Expeditionary Forces.

Elizabeth contracted influenza during the devastating Influenza Pandemic of 1918–1919 in which millions of people died worldwide and returned to Base Hospital 15 in Chaumont, France. She was relieved from service on April 26, 1919. 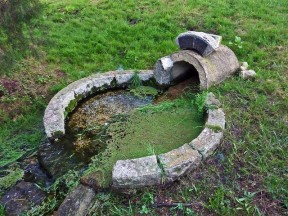 The springs where Elizabeth was honored for her military services and her DAR service in 1924. Photo by Megan Johnson.

Details about Elizabeth’s life following WWI are elusive, but there are some clues that she continued a very active life. She was a member of numerous professional nursing, service and patriotic organizations, and she served them in leadership roles.  On June 5, 1924, Elizabeth was honored by the “Patriotic Societies of which Miss Lee was a member” when a bronze tablet commemorating her WWI service, as well as her service as Historian of the Francis Scott Key Chapter of the DAR, was unveiled at the newly restored and enclosed natural springs of “Ye Coole Springs” at Charlotte Hall, St. Mary’s County, Maryland.  It was an appropriate honor, as this was the location of one of the first hospitals of the American Colonies in the early 18th century. 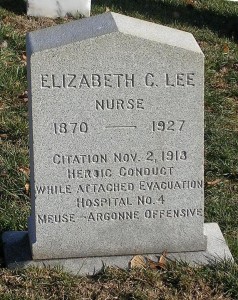 Elizabeth passed away after a long illness on May 15, 1927, and was buried in Arlington National Cemetery. Through at least 1992, The University of Maryland School of Nursing continued to honor her years of nursing service with the “Elizabeth Collins Lee Award” for the nursing student graduating with the second-highest scholastic average.