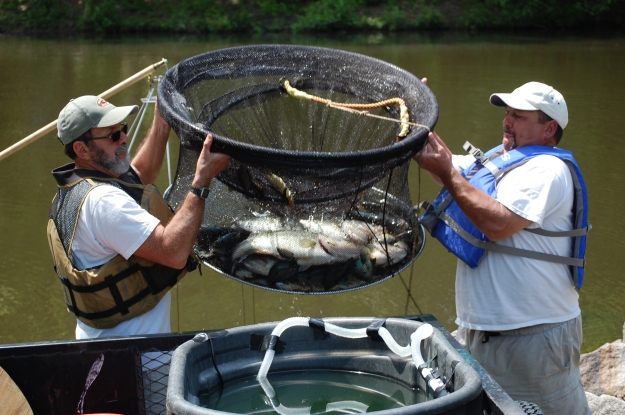 It was an unusual day for the fish. An adventurous one, too. They’ll certainly have something to talk about with their BFFs.

If they can find them.

On May 15, an estimated 800 to 1,000 pounds of fish were shocked, netted and moved from Huntsman Lake to Lake Mercer. Huntsman, a 28-acre lake in the Pohick Creek watershed, will be drained later this year to allow for dam maintenance, which would certainly have been an even larger inconvenience for the fish.

Ecologist Shannon Curtis of the county’s Department of Public Works & Environmental Services says that after Huntsman Lake is drained, the lake bottom will be dredged, and the sediment that has flowed into it in recent years because of erosion upstream will be removed. That means the lake will be deeper and, once again, more effective at trapping sediment, which Curtis says is one of the lake’s primary functions.

In addition, there will be some engineering work done on the Huntsman Lake dam.

There’s nothing wrong with the dam. The lake’s emergency spillway needs to be upgraded because there are new regulations governing dams. This is just an upgrade to meet the new regulations.

Fairfax County also is going to repair and replace the riser structure, which visitors to the lake see as a large concrete block standing out in the water near the dam. It houses the pipe that drains the lake into the stream below the dam, and it’s the work on this structure that requires that the lake be drained.

There will, unfortunately, be a loss of some fish that are in the lake. That’s why the shocking boat was on the waters saving as many fish as possible. The loss of fish means there may be a stench around the lake, and there could be visits from predators – hawks, eagles, foxes – looking for an easy meal.

There’s good news coming at the end of the project. “There’s a lake restoration plan that’s going to occur that’s actually going to improve the conditions of the lake,” Curtis said. Engineers plan to add an underwater berm, or ridge, across the upper part of the lake that will create a sediment forebay, a kind of pocket in the lake’s upper reaches. That pocket should catch most of the sediment coming into the lake and help the deeper part of the lake remain somewhat free of sediment. That also means the next time the lake requires dredging that engineers may not have to drain the entire lake. Rather, they can lower the water so that the silted-in area behind the berm can be dredged while water in the deeper, lower basin can be left in place.

There are shoreline improvement plans, water quality improvements and habitat improvements coming for the lake after the construction. Residents may notice a change in the flora around the shoreline.

Curtis says the shocking showed that the lake “currently actually has a very productive fishery in it.” Some nice largemouth bass in the two-to-four pound range were captured and moved to Lake Mercer. Once the construction work is complete and the lake is restored, it will be put on an annual stocking plan managed by state fisheries biologists.  Even better, the restoration plan includes creation of submerged habitat (structure) for fish, shoreline stabilizations and both wetland and aquatic vegetation plantings.