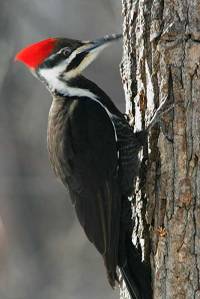 Winter is a colorful season for woodpeckers in Annandale. Those of us at a certain age can remember Woody Woodpecker’s signature quote and his subsequent maniacal laughter. However, when folks call us at Hidden Oaks Nature Center to ask about woodpeckers knocking on their houses, they generally aren’t laughing.

Woodpeckers knock for a variety of reasons, not the least of which is communication and territorial establishment. That’s why sometimes they knock on metal drainpipes and gutters to the puzzlement of our patrons. “But it’s not wood!” they contest. Woodpeckers though, know that drainpipes, like many hollow logs and snags in the forest, are amplifiers. Once they learn through experience how raucously they can knock, they return to the source. That’s how woodpeckers tell others of their presence and/or perhaps availability. That’s the good news they want to broadcast.

However, they might be broadcasting bad news to you. If they’re knocking on your wooden eaves or fascia boards they might be hunting insects that are already rooting around in there, potential headaches for homeowners.

And about those headaches — why don’t woodpeckers suffer from them? It turns out that, unlike heavy-metal millennials in a mosh pit, a woodpecker’s head is designed for head-banging. They can knock up to 22 times per second, and their tongues wrap all the way around the backs of their heads to provide excellent cushioning for their brains. This enables woodpeckers to withstand decelerations (knocking and its after-effects) at more than 100 times the impact than can humans. In fact, woodpeckers’ shock absorption qualities were intensely studied to design cases for flight recorders in airplanes.

That same super-long tongue is the scourge of insects everywhere, which wrongly think they’re safe hiding in deep holes of logs and standing dead trees or buried in the wood siding of your house.

Woodpeckers use their excavating skills to hollow out burrows, which are often used year-round as homes. Sometimes they’ll use existing holes, but some individual birds like to create their own nesting cavity each year. Different strokes for different species.

At Hidden Oaks right now, there’s potential for you to see downy, hairy, red-bellied, northern flickers and, during really cold weather, yellow-bellied sapsuckers at the suet feeders. You might also spy the much-larger pileated woodpecker with the prominent comb often thought of in connection to the aforementioned Woody Woodpecker. Cartoonist Walter Lantz, however, noted that the acorn woodpecker from the west was the actual inspiration for his ideas in the 1940s.

Woodpeckers breed in the late winter/early spring, but the pairing-off and courtship often starts in winter. During this time certain species get their brightest coloration to be more attractive to potential mates. This effect makes woodpeckers brilliant and vivid contrasts to the backdrop of winter’s bleakest, gray months.

Do you want to see woodpeckers in your backyard this winter? Suet feeders are the best way. Fill them with commercially-sold suet bricks, or just fill them with raw beef fat purchased from or donated by your local butcher.

Hidden Oaks Nature Center keeps suet and fat feeders out during the winter so our patrons can view these beautiful creatures on the fly. Come see for yourself.

Our Stories and Perspectives
Blog at WordPress.com.
Loading Comments...