And the boy loved the tree….

There is a tree at Sully Historic Site that has given everything it had to soothe and please people over the past three decades, and the time has arrived for it to come down. Shel Silverstein’s brilliant story, The Giving Tree, reflects the same feelings that some people will experience when they learn that the largest and best-known tree at the park has reached the end of its run. The red mulberry that dominated the landscape in the open field not far from Sully’s main house has to be taken down. 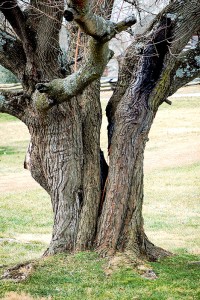 “It is sad, and it is shocking,” said Site Manager Carol McDonnell. The mulberry’s trunk is badly split to the point that a visitor can, standing at the right angle, see through it. McDonnell said the most disappointed people will likely be those who have worked Sully’s annual Fathers’ Day car show. Through recent decades the mulberry has provided shade for the show’s flea market, a resting spot away from summer’s searing heat reflecting off the metal machines, and comfort for staff, volunteers and visitors who have picnicked under the security of its arms.

Still, just as the tree in Silverstein’s book provided rest and value to the boy in the story after it had been cut down, the trees being removed at Sully will have purpose a little longer after they are felled. None of the wood will leave the Sully property. The trees will become mulch along the park trails and firewood to stoke the hearth and warm the house during school programs. There also is hope that the beloved red mulberry will get a feature role in the park’s interpretation. The site’s representative slave quarter is in need of a table, and the mulberry may become the source for that addition. As in Silverstein’s book, the tree will continue to provide a place of rest.

The treasured mulberry is one of several trees being removed during the early 2015 winter months because of safety considerations. Every one of the trees taken down “were either dead, had bad bases, or 90% of the limbs in the top of them were dead,” said Everett ‘Butch’ Loughery, the Park Authority’s Landscape and Forestry manager. “The trees that we’re removing are too dangerous to leave stand,” he said.

Trees leaning toward historic buildings also were removed. Loughery said a contractor was hired to prune trees that could be salvaged.

The trees around the park’s main house are actually a historic anachronism. The site preserves the land as it was in the early 1800s, and at that time there were no trees near the main house. Over the years they’ve either been planted by families that lived there or by the arbitrary arborists of nature. Trees, like us, have a life span, and some of those being removed have not been fully leafing out in recent years, and others were beginning to hang over park paths.

Some of the walnut trees along pathways at the historic site were severely damaged in storms, Loughery said. The trunk of another mulberry being removed had split several years ago and was being held together by a bolt that had been driven through the branches of the split. Site visitors may continue to see work being done on the trees into the early spring. 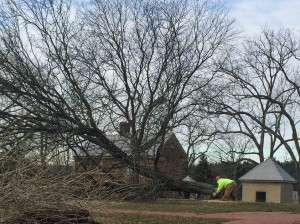 The story of the trees at Sully will continue after the removal project. Funding for new plantings is being sought, and there may even be a young red mulberry given a prime placement in the open field near the main house. It will be a chance for another generation of people to grow up with a new giving tree and to share the experiences of those who rested and cooled under Sully’s red mulberry for the past three decades.

And the tree was happy.

– The closing line of The Giving Tree, by Shel Silverstein

Author David Ochs is the Manager of Stewardship Communications for the Park Authority’s Resource Management Division.