“I just got a call from Marge Lundegard. Bob passed away yesterday.”

Bob Lundegard spent much of his retirement giving back to Colvin Run Mill.

Those were the opening lines of an email that quickly circulated and spread heartbreak through the Fairfax County Park Authority following the death of Robert Lundegard on Monday, May 20, 2019. Lundegard was a park icon one park official called an “amazing guy.” He will be remembered for his love of parks and, in particular, for Colvin Run Mill Historic Site.

“It is impossible to think about Colvin Run Mill without thinking of Bob,” said Dranesville Supervisor John Foust. “He was a man of fierce determination and tireless energy who got things done. His efforts to renovate the mill and expand its educational programs have left a profound and enduring legacy.”

Lundegard and his wife, Marjorie, spent much of their retirement time volunteering and spearheading preservation fundraising efforts at Colvin Run Mill. The retired federal government science and technology expert believed that future generations can learn from yesterday’s innovation. He noted that in a world of ubiquitous smart phones, the water-powered mill of Colvin Run “was the technology up until after the Civil War when electricity and wind power were developed.” 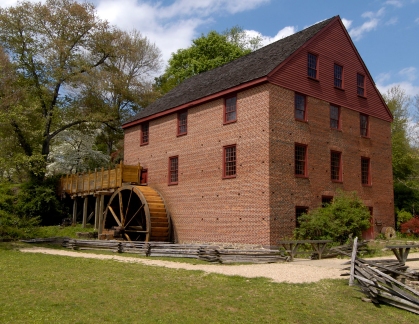 “The Park Authority and Colvin Run Mill lost a true friend,” said Fairfax County Park Authority Board Member Tim Hackman. He added that Lundegard “was a dedicated and visionary leader. He saw the importance and value of educating the public, and especially school children, about Fairfax County’s colonial and 19th Century heritage, and pushed for the restoration of the mill and miller’s house and facilities into the fully operational facility we see today. His spirit and commitment will be greatly missed.” 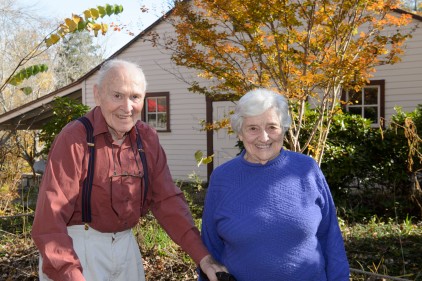 Bob and Marjorie Lundegard at Colvin Run Mill in November 2015.

Education was important to Lundegard. He taught at Syracuse University, and Marjorie is a retired Oakton High School chemistry teacher who started volunteering at Colvin Run in 1988. The Lundegards were among the first members of the Friends of Colvin Run Mill when it formed in 1997, and Robert Lundegard served for a time as the president of the support organization. Under his leadership, the Friends raised money for lights on the mill and a portable mill called a meadows mill for demonstrations. The Lundegards also raised funds for the mill through a partnership with a consignment shop in McLean and through Marjorie Lundegard’s writing, publishing and selling of more than a dozen books about mills in the region. Together they raised more than $50,000 to support Colvin Run Mill’s capital improvements plan, which includes renovation of the miller’s house at the site and the building of a planned educational visitor center.

Author David Ochs is the Manager of Stewardship Communications for the Resource Management Division of the Fairfax County Park Authority.