One of the most exciting things about visiting Fairfax County parks is encountering wildlife. A family visit to a playground is made more special when a child points in awe at a deer moving quietly through the trees. A walk along a stream valley trail is more memorable when a fox scampers into view, even if only for a brief moment. And catching a glimpse of a bald eagle soaring high above a lake can make a bad day of fishing slightly more palatable. Wildlife is abundant on parkland, but you have to spend time in the parks for your best shot at seeing something extraordinary. 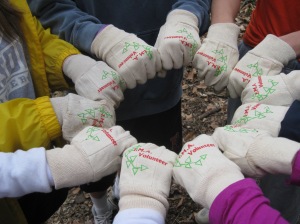 One group that spends a significant amount of time in parks is our Invasive Management Area (IMA) volunteers, our frontline defense against the spread of non-native invasive plant species. These intrepid volunteers endure searing heat, stifling humidity, stinging plants, and painful thorns as they search for invasive plants to remove and replace with native species. Because their work often takes place off the beaten path, IMA volunteers also frequently encounter wildlife.

As we celebrate Parks & Recreation Month’s GET WILD theme, we thought we’d share some of our IMA volunteers’ incredible wildlife sightings. Enjoy these retellings and keep an eye out for wildlife in the parks and around your home. Your wildlife encounter, whether simple or spectacular, will be a story you can share with family and friends for many years.

Vivian Morgan-Mendez, a longtime volunteer at Nottoway Park, often sees bright orange Baltimore orioles and bluebirds flitting near community garden plots. She also remembers the afternoon a wild turkey flew out of the brush where her crew was working. “All five of us saw it. Pretty amazing!” However, sometimes wildlife encounters aren’t always fun; just ask Morgan-Mendez. “Several of my IMA volunteers and I were stung after we dug up a ground bee hiding place along with invasives. It was a very painful experience.”

Volunteer Jennifer Porter credits her proximity to Holmes Run Stream Valley Park for the abundance of wildlife activity around her home. “We have foxes around. They sashay down our pipe-stem drive at will at almost any time of the day or night. Our next door neighbor’s cat was forced to take refuge under a car to escape one fox that seemed too interested. Some years ago now, we had a fox on the front porch chasing our blind cat. A few days after that, another fox chased our second cat up the back steps.”

Porter used to be fond of gardening barefoot, at least until she nearly stepped on a copperhead. “Barefoot appears not to be a good idea,” she advises. One summer, Porter’s cats brought 16 small snakes into the house including one that tried to escape by crawling inside the piano pedals.

IMA Volunteer Renee Grebe photographed a pair of coyote pups as they crossed a creek on a downed log.

Those who venture into local green spaces have a unique window within which to see unusual things. Renee Grebe reports Clermont and Loftridge Parks are “alive these days – coyotes everywhere it seems.” Grebe has also encountered coyotes around her neighborhood, including a pair of pups she saw crossing a creek on a downed tree. Several times a week last summer, she began hearing the howls of a newly established coyote pack at dusk, and the howling has begun again. “The cacophony makes it sound like there must be 100 of them (though at latest report there may only be four adults and three babies).” She continued, “Also, it’s not unusual (and almost expected) that if an ambulance siren goes off, the coyotes will howl back.”

Grebe finds humor in some of her wildlife encounters. One morning she came upon a fawn that was standing a short distance from the path. The fawn seemed curious and crept closer as Grebe stood still. “But at one point,” she recalls, “it must’ve hit a spider web right on its nose because all at once it started snorting and jumping in place and shaking its head. It was so funny! I wish I had it on camera. It was just the reaction you’d have if you didn’t expect yourself to walk into a web.”

Wilson Harris was intrigued by a red fox that recently visited a bird feeder in his front yard. “The fox was just sitting placidly there. No sign later of any carnivorous activity” Harris has also seen box turtles ambling across his yard.

When Greg Sykes isn’t volunteering with IMA he’s taking photographs, and wildlife is one of his favorite subjects. While kayaking at Royal Lake he snapped a photo of a pair of egrets that came closer and closer to him. “I thought they might try landing on my boat!” he said. Sykes has seen foxes and kits by a den, sometimes with a dead goose or duck. On another kayaking excursion, this time at Lake Accotink with his dog, a bald eagle landed right in front of them.

Beavers are a common sight in lakes and creeks.

Royal Lake has been a particularly good place for Sykes to encounter wildlife. He has seen muskrats playing among wood duck chicks and he is one of the lucky few to have seen a river otter playing in a tributary in the park. Sykes remembers watching bats and beavers at twilight. “It was cool to watch the bats, and then a beaver swam up to where I was with a mound of vegetation and made a scent pile by the shore. I don’t think he knew I was there.” Sykes offered a tip to aspiring wildlife photographers. “You don’t always need blinds to photograph wildlife. I’ve used a camera bag and lay on my stomach to get some skittish animals, like hooded mergansers.”

Remember, Get Wild this summer and spend some time in the parks. You’ll be surprised and amazed by the wildlife encounters waiting for you there.

Have you had a memorable wildlife encounter in the parks? We invite you to share your story in the comments field.

You can view and print brochures about wildlife and other stewardship topics here.

Our Stories and Perspectives
Blog at WordPress.com.
Loading Comments...