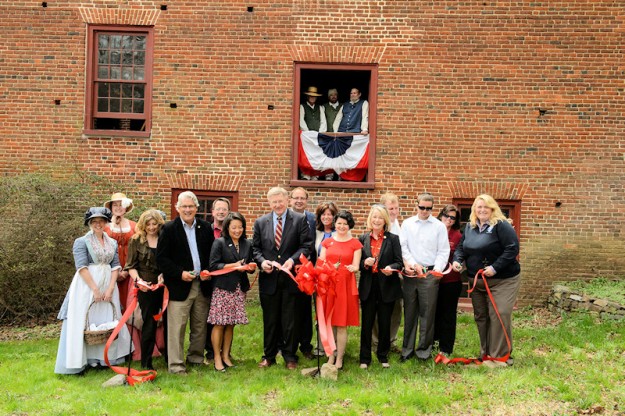 The official grand re-opening of the mill was held on April 19, 2015, with a ribbon-cutting ceremony that took place next to the mill while corn was being ground.

Site Manager Mike Henry says visitors often ask why it took nine years, 1802-1811, to build the massive mill that still grinds today at Colvin Run Historic Site. He’s quick to answer that it took us over 40 years to reconstruct it.

Colvin Run Mill today is as close to its historic origins as it has ever been.

The broken shaft discovered last year has been replaced. The final phase of reconstruction, which started in 2014, is complete. And this marvel of history is grinding once again.

The official grand re-opening of the mill was held on April 19, 2015, with a ribbon-cutting ceremony that took place next to the mill while corn was being ground. The long-planned restoration is complete, and Colvin Run Mill is ready to run at full capacity for the first time in decades.

Colvin Run is part of a rare group of historic sites. Normally a visitor to a historic site looks and sees what was there. But at Colvin Run Mill, you can experience the exact same smells, sounds and sights that people of 200 years ago experienced. This was American industry and American life in the 1800s.

Grinding takes place at the mill from noon to 3 p.m. on the first and third Sundays of each month, April through October.

It is a beautiful piece of wood. Colvin Run Mill Site Manager Mike Henry says the white oak that arrived at the park on Feb. 3 is perfectly straight and doesn’t have a knot in it.

The tree was felled in New York State during Hurricane Sandy in October 2012. It’s finding a second life as a main shaft at Colvin Run Mill Historic Site. It will create its place in history this spring, and site staffers hope to have the mill grinding again in April.

The replacement was needed after Miller Mason Maddox found a crack in the old shaft during a routine inspection. When the old shaft was removed, Henry said staff learned that wood rot fungus had taken hold where moisture had penetrated the wood, so the crack was a timely discovery in a shaft that had limited life remaining.

Henry said the new shaft will be kept under wraps and out of the weather while given time to acclimatize to its environment. Millwright Ben Hassett has braced the mill’s water wheel, and removed and supported the greater face gear in the gear pit. Metal gudgeons will attached to the ends of the new shaft, and metal bands will wrap around the shaft to keep the gudgeons in place.

Fingers are crossed, but the massive project that began last year at the mill is still on track for a scheduled April 19, 2015, gathering to celebrate the completion of a long-planned restoration that will have the mill running at full capacity.

The staff at Colvin Run Mill Historic Site was hosting a lunch for its volunteers and was planning to unleash its waters for a spin of the big wheel and the grinding of some flour when miller Mason Maddox delivered the bad news. He’d found a crack in the axle of the mill’s main water wheel.

The water wheel can’t spin on a cracked shaft, which leaves no way to capture any power from the water flowing through the millrace. Tours and interpretation continue at the mill, and a smaller system at the historic site can be used to grind flour for sale, but there will be no grinding with the mill’s big stones for several months.

The 6,000-pound shaft that cracked was made from the trunk of a single white oak tree and was installed as part of an update at the mill in 2001 when the existing water wheel was built. Its demise was not unexpected. Although some last longer, the lifespan of woodwork like this is typically 10-to-15 years, and it’s been 12 years since this wheel was installed. In addition, the wood had a fungus growing on it, and it had become infested with woodborer beetles.

There’s work ahead to determine how long the mill will be sidelined. The water wheel will be disengaged and the broken shaft removed. Colvin Run’s Assistant Site Administrator Ann Korzeniewski says that, in a perfect world, a new shaft simply would be slid in place, although that’s not a simple operation. In addition, the spokes and the wheel were also installed in 2001, and those spokes are attached to the bug-infested axle that broke.   Until all the parts are removed and analyzed, staff won’t know how much of the mechanism will need to be replaced.

The Park Authority is researching options for funding the project, estimated to cost approximately $83,000. There may be limited funding available because the current restoration that is taking place at the mill appears to be coming in under budget.

There is good news in the midst of the problem. Because millwright Ben Hassett is already working on a restoration project at the mill, arranging a time for B.E. Hassett-Millwrights, Inc. to take on the new project may be just a matter of adding time to the current project. Pending any further setbacks, replacement of the cracked shaft would likely take about 75-90 days. In addition, there is another white oak tree trunk immediately available at a lumber yard. That alone will save a year of time finding a suitable tree, felling it and curing the wood.

The restoration project to restore the second grinding stone at the mill, already well under way, will continue. That project will allow the mill to run at full capacity for the first time in decades, however that new installation cannot be tested until the water wheel shaft is replaced and the big wheel is turning again.

Colvin Run Mill Site Manager Mike Henry says “There are a lot of wild cards in this mix,” but he is hopeful that with a little luck the historic site still will be able to hold its planned April 19, 2015 ceremony to celebrate the completion of a long-planned restoration that will have the mill running at full capacity.

October 19, 2014 is Friends of Colvin Run Mill Day at Colvin Run Historic Site. Any visitors at the mill that day who sign up to join the Friends group will receive a free Four Floor tour – a rare chance to see the entire mill, including areas not usually open to the public.

To help fund the mill restoration and repairs, contact the Fairfax County Park Foundation at 703-324-8582 or email.