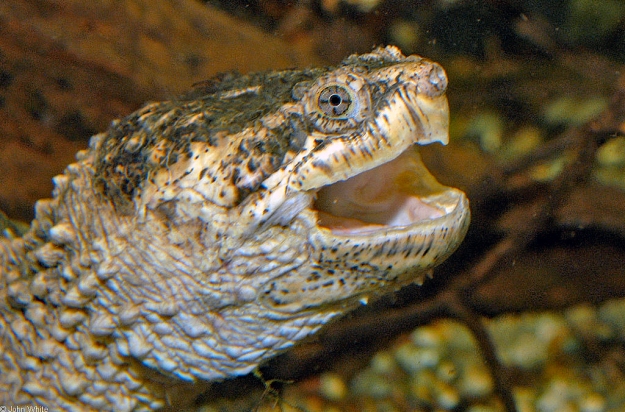 Tough looking critter, huh? Wish we could say he has a heart of gold, but mostly he just wants to be left alone.

This is our local buddy, the snapping turtle (Chelydra serpentina). It’s Virginia’s largest freshwater turtle, and the second largest freshwater turtle in the United States. The biggest is the alligator snapping turtle, but those aren’t naturally found in Virginia. So if you see a reptile like this in Fairfax County, it’s likely the plain ol’ snapper.

Snapping turtles are a native species in Virginia, and they’re pretty commonly seen in our area. You’ll find them hanging around ponds, lakes, streams, rivers and swamps.

How can you confirm what you’re looking at? Well, start by considering its size (they’re big) and then look at three things – its top, its beginning and its end, known as its shell, head and tail. The adult snapping turtle has a large head with a moderately curved, sharp beak. At the other end, the tail is long and has a series of jagged scales on its top side that look like the teeth on a saw. Its upper shell (carapace) will be rough, and there are three rows of ridges, called keels, running its length. The shell also is serrated along its rear margin, and – here’s a good tip – it’s usually covered with mud or algae. Young turtles have more pronounced ridges and peaks on their carapace that smooth with age. Older specimens are often smooth-shelled.

So how big is a big turtle in our area? The length of an adult snapping turtle’s shell may be 15 to 18 inches, although we don’t recommend pulling out a rule and testing that fact. They usually weigh anywhere from 10 to 35 pounds, and some may top out around 50.

Snapping turtles are active from March through October, but you might see one in water any month of the year. Most of their nesting occurs in late May through June. Snapping turtles rarely leave their aquatic habitat except during the breeding season, at which time females move upland in search of a place to dig a nest and lay eggs. During this time of year, you might see one crossing a road or digging in a yard. When they do travel, they can go a long ways. They’ve been found as far as a mile from the nearest water source. 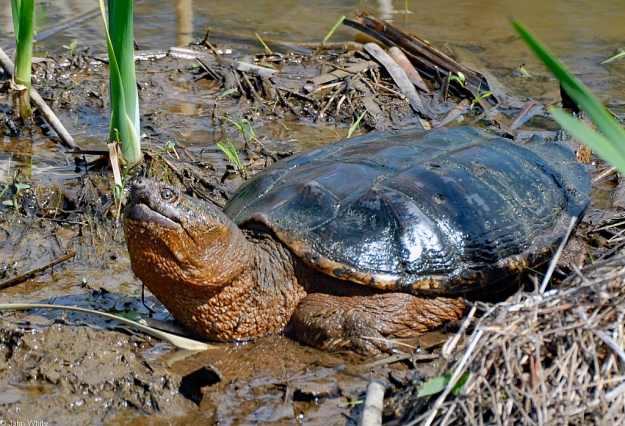 Are they scary? No, but don’t try to pet one or lift one. Although generally docile in water, snapping turtles will strike viciously if captured or cornered out of water. Follow the usual rules for wildlife. Don’t bother them. Watch and enjoy from a distance.

Copyrighted snapping turtle photos are used with the permission of John White.