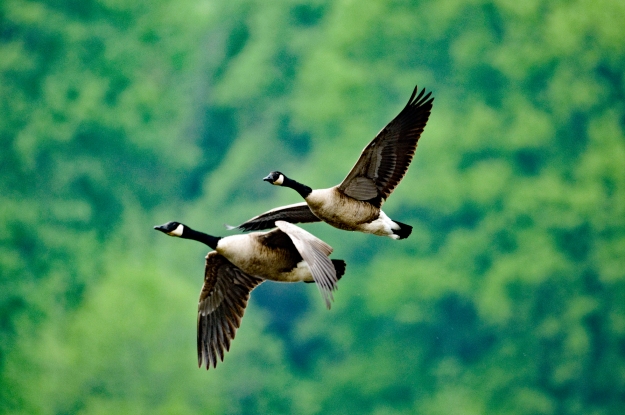 They look majestic, winging across the sky in aerodynamic V-formations. In the late 17th century, King Charles II introduced Canada geese to Britain in the London ponds of St. James’s Park. In the 1950s, Green Spring owner Michael Straight introduced them to his ponds in Alexandria, Va.

The king’s exotic Canada geese, part of his beloved ornamental waterfowl collection, turned out to be a royal nuisance. Michael Straight’s gaggle and their descendants at Green Spring Gardens have become, in the eyes of some county residents, an irritating legacy. Love them or hate them, Canada geese are here to stay.

The Virginia Department of Wildlife Resources classifies resident (non-migratory) geese as “nuisance and problem wildlife.” We all know why. With a diet of primarily grass and aquatic plants, they thrive on our lawns, golf courses, soccer fields, and in our parks and ponds. The result is messy droppings everywhere which, along with overgrazing, can cause landscape damage, pond erosion, and poor water quality. They also have a nasty reputation for terrorizing people. However,  don’t blame the geese for being here. We invited them.

In the early 20th century, Canada goose populations in North America were decimated by hunting and habitat loss. Their comeback is due to a highly successful wildlife protection program that was active from the mid-1950s to the 1980s. It bred the birds in captivity and reintroduced them to areas where numbers were dwindling. In 1970, the U.S. Fish and Wildlife Service published Homegrown Honkers, a handy guide to raising backyard geese.

Against this backdrop, it’s surprising that Michael Straight got into a spot of trouble in the 1960s for raising geese.

In his 2004 memoir “On Green Spring Farm,” Straight wrote: “For some years, I’ve tried to make a bird sanctuary out of my Virginia farm. I’ve taken special pride in my flock of Canada geese.” He fondly described them as “celebrities in Fairfax County.” He also noted, “They caused several accidents as they flew around in formation, a hundred feet above our highways.” At the time, the honk of a goose in Virginia was a novelty.

Michael and longtime property caretaker John Quast dug out the ponds into their present-day configuration, complete with a small island, the ultimate goose nesting site. It created a perfect refuge.

In January 1963, the Department of the Interior informed Michael that his “Federal Propagating Permit Number 4-157” had expired and demanded that he dispose of all his geese. Michael resisted, and the authorities stepped in.

Neighbors had complained. In a 2002 interview, Michael’s wife Belinda recalled that the county sheriff received calls from the nearby Lake Barcroft community, where the geese were spending a lot of their time. To solve the problem, a game warden was dispatched to round up the flock and transport them 180 miles away. He was evidently unaware that even resident geese like to move around, pond-hopping at distances of up to 300 miles a day. “I think there were 37, and 42 came back,” said Belinda.

Long story short: Michael battled the government and ultimately won the right to carry on feeding cracked corn to his geese without a federal permit.

Canada geese still enjoy a haven at Green Spring and throughout the D.C. suburbs. They are federally protected, and they are highly efficient breeders. To mitigate damage and conflict with humans today, Fairfax County uses a range of humane methods to keep the goose population in check, including deterrents, landscape modification, and egg-oiling conducted under special permits from the U.S. Fish and Wildlife Service.

Geese were introduced to St. James’s Park and to Green Spring out of love and admiration, and they do have admirable qualities. Canada geese are intelligent, highly social, cooperative and loyal. They mate for life and mourn a partner’s death. They are extremely protective of family members and display aggression only when defending them, otherwise they are quite amiable towards humans. They honk, hiss, and flap in annoyance, but also coo in affection. We can co-exist if we mind our manners around them. No running or shouting or getting too close, especially if there are goslings nearby. They are entertaining to watch; enjoy the show!

To learn more about Canada geese management in Fairfax County, go to: https://www.fairfaxcounty.gov/wildlife/geese-management-program

Michael and Belinda Straight donated their Green Spring estate to Fairfax County in 1970. Their gift to the community comprised the 1784 house, the c. 1830 springhouse, various outbuildings, 18 acres of land, two ponds and – love them or hate them – all resident Canada geese.

Author Debbie Waugh is the Historian at Green Spring Gardens.