Most people around Northern Virginia probably don’t get to see what wildlife is doing on a daily basis, and there is a lot of wildlife here. The Fairfax County Park Authority has several ways of connecting people and wildlife, such as nature centers and hiking trails. One of the fun methods of connection is the candid camera.

Since January, Riverbend Park staff has been conducting a camera-trap survey to learn about wildlife in that park. Cameras with infrared sensors that detect both heat and motion, called trail cameras or game cameras, are placed along wildlife trails. When an animal drifts by and breaks the infrared beam, the heat or motion triggers the camera, which can be set to record one or multiple frames. The boxes can be fitted with an infrared flash that will limit any disturbing of the animals. And the cameras can be programmed with a delay of five or ten minutes between shots so that the same animal isn’t photographed dozens or hundreds of times while hanging around.

Staffers never know exactly what to expect each time they check the camera storage cards. Riverbend features a large meadow, a riverbank, creeks, ponds, and deep forests — diverse habitats. These combine to host a wide range of wildlife. Sometimes thousands of pictures reveal nothing. Other times, there are pleasing surprises.

Among Riverbend’s photobombing animals are coyotes, which confirms their presence in the park.

The most common visitors strolling past these cameras have been white-tailed deer, raccoons, and gray squirrels. Foxes and otters also have stopped by for portraits. Riverbend Head Camp Counselor Brian Balik, who uses his own cameras to record some of the photos, says his favorite picture so far has been that of a red fox with white legs. Those are unusual markings and something he’s not seen before. 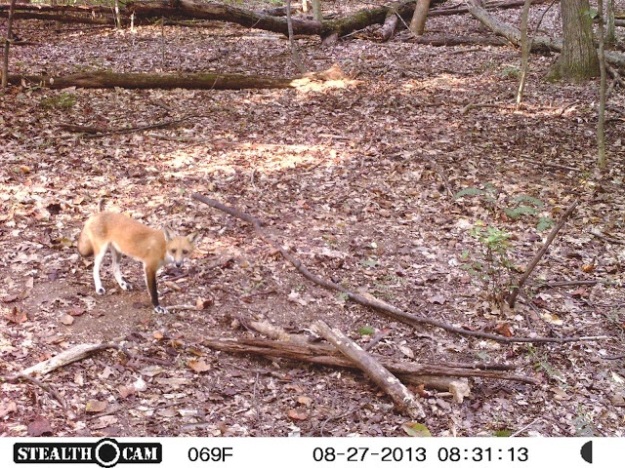 This fox showed off its unusual white legs for the camera at Riverbend Park.

The value in these photos is in learning what animals are around. That helps staff know what steps to take to protect the wildlife. Years ago, people had to rely on actual sightings of animals. Now, staff can see exactly what is in a specific area 24 hours a day, seven days a week.

The cameras also reveal animal behavior. They record the times the animals are awake, the population, the areas of a park they use, and how frequently they use particular areas. Riverbend staff is hoping the cameras will help them learn where the visiting coyotes live and whether their home is in the park.

Ellanor C. Lawrence Park (ECLP) in Chantilly also has conducted camera-trap surveys, and a coyote has been a common visitor there as well. ECLP Naturalist Tony Bulmer says that in late September that coyote brought along a friend, and he suspects the pair may hunt together. Coyotes do not travel in packs, like wolves, but rather they move about separately or in a family unit. ECLP is hoping their cameras will have more to teach about the coyotes, a species that Bulmer calls “one of the most maligned mammals in the United States.”

Huntley Meadows Resource Manager Dave Lawlor analyzed almost 4,000 photos in the Old Colchester survey, and he pointed out that reviewing them on a computer became a little strange because, since the camera doesn’t move, the background of the photos never changes. “It makes your eyes go fuzzy after a while,” he said. Lawlor used antler points and branches to identify individual bucks, but identifying individual does is much harder.

The Old Colchester survey, possibly the most thorough one ever conducted on Mason Neck, revealed an estimated population of up to 60 deer in the 139-acre park, the equivalent of 278 deer per square mile – a lot. Naturalists estimate that the healthy population of deer in an eastern forest is 15 to 20 per square mile.

Another survey was conducted at Old Colchester this fall, and those photos will be analyzed over the winter.

Huntley Meadows Park Manager Kevin Munroe said that Northern Virginia has an overstock of deer because there’s often much more food available for deer in a suburban setting than in a pristine forest. Lawlor added the amount of nutrients deer can ingest in suburbia could be ten times that of a forest and that people think fertilizer feeds plants. He said fertilizer is nutrients for deer.

The large number of deer also affects forested areas. Some parkland has virtually no vegetation for four or five feet up from the ground except for invasive plants that deer won’t eat.

Information like this, plus the input from the trail cameras, can be used as part of the structuring of a deer management plan.

Oh, and those coyotes are widespread across the county, too. The Old Colchester survey also turned up a photo of a coyote on Mason Neck.