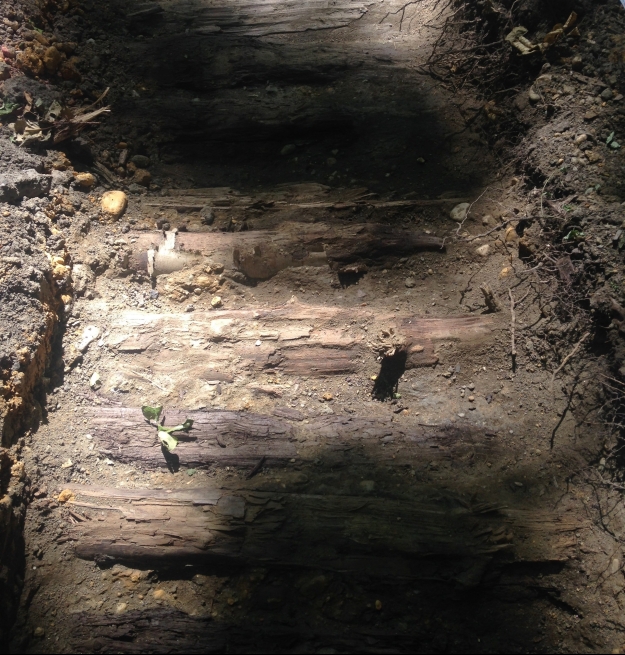 If you look at all the roadways crisscrossing and checker boarding Fairfax County, any random 90 feet of asphalt and concrete would not stand out. But there is a section of roadway we know about that stands well above all other county roads because of its makeup and historical significance. 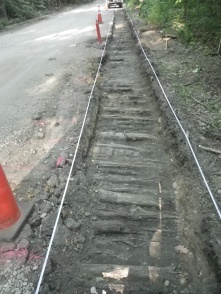 In June of 2016, the Archaeological and Collections Branch (ACB) of the Fairfax County Park Authority was notified of an archaeological discovery during a routine road maintenance project near an entrance to Lake Accotink Park. The earth had opened to reveal a 90-foot long section of corduroy road, a type of road made by placing sand-covered logs perpendicular to the direction of the road. They were constructed to support travelers over low or swampy areas, improving impassable mud or dirt roads. They helped, but they were rough even in the best of conditions. Loose logs were a hazard to horses.

County archaeologists immediately documented the road. Detailed notes were taken, and scale drawings created. The hand drawings were digitized and added to the Geographic Information System mapping layers maintained by the ACB. Archaeologists mapped the site using a surveyor’s total station so that its location would be recorded with a very high degree of accuracy. The ACB also updated records maintained by the Virginia Department of Historic Resources.

Just as in real estate, location is critical in archaeology. Based on the road’s proximity to other Civil War era sites and features, including the Orange and Alexandria Railroad, it is likely that this road was built in the middle 19th century around the time of the Civil War. Because the site was in a road project area, the best way to preserve it was to document it and then leave it in place. To better protect it, the road was capped by a layer of gravel prior to repaving of the existing road. Because of the documentation, future archaeologists and future maintenance personnel will know of its existence and can take appropriate steps to protect it. This particular road was found to be intact and is highly significant. It likely is eligible for inclusion on the National Register of Historic Places.

Discovery of such a well-preserved road is a rare find, and this wasn’t the first such discovery in Fairfax County. Less than a year earlier, construction crews made a similar find on Ox Road near George Mason University.

“I didn’t think I would ever see one (corduroy road),” said Fairfax County Park Authority Senior Archaeologist Chris Sperling, who oversees the Park Authority’s archaeological efforts and worked on both corduroy road sites. “Discovery of two in less than a year is unheard of.”

Get an in-depth look at corduroy roads and their importance to Fairfax County in this video interview with Sperling.

The ACB serves numerous roles in the preservation of Fairfax County’s heritage resources.  The office reviews development plans in the county, coordinates protection of cultural resources for federal projects, and conducts field excavations that comply with local, state, and federal policies and laws. Recovered artifacts are processed in a laboratory facility in Falls Church. Approximately three million artifacts and documents are in the county’s archaeological repository.