Fairfax County residents are blessed with both the conveniences of an urban life and an environment that supports a wide range of wildlife. We don’t have to go far from home to see deer, eagles, fox, frogs, snakes, fish, coyotes, salamanders, geese, ducks and other bird species numbering over 200 that have been spotted in parks. A former county wildlife biologist once said there may not be a yard in Fairfax County that isn’t crossed by a fox at night.

Generally, our interactions with wildlife are mild and relatively uneventful. They go their way and we go ours. There’s nothing here trying to eat us. Occasionally we are rewarded with a sighting that brings us closer to nature. Once in a while we’re too close to nature and we clash – a car accident with a deer, a snake bite, a bee sting or a hissing goose.

When nature gets a little close for your comfort, you don’t have to turn into a snake handler like some of our nature center volunteers. There are steps you can take that will keep you safe and in your wildlife comfort zone.

First and foremost, do not approach any wild animal. Don’t pick up a snake to be cool, don’t pick up a newborn that looks like it’s alone, don’t try to help an injured creature of the wild. Any animal that’s out of its comfort zone and facing an unusual situation might lash out. Rabies is also a possibility in Virginia.

If you have any reason to think you may be dealing with a rabid or dangerous animal, get away from it and call either the police non-emergency number, 703-691-2131, or 911. Report any wildlife acting in a dangerous manner, whether or not it’s on parkland, to the Police Department’s Animal Control Division at 703-691-2131. 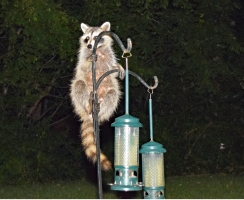 What about an animal that repeatedly returns and causes problems? Why not trap or relocate a nuisance beast? For one, it’s against the law, a violation of state game regulations, and relocation rarely works. The animal may return to the site of the problem, may start a conflict in a new place, or may not survive the stress of the move. In addition, if the animal was there because the habitat was good for it, another animal of the same species may move in. And once you trap an animal, what are you going to do with it? There’s no place to put it because, except for catch and release fishing, it is against Park Authority regulations, state law, and sound wildlife management to release any animal, wild or domestic, on parkland.

There are, however, people who can help. The non-profit Wildlife Rescue League provides wildlife rehabilitation services in Fairfax County. The Rescue League hotline number is 703-440-0800. It’s usually best for wildlife to be left in the wild, and sometimes an injured animal may not recover. However, we understand there are people who want to help animals. Do it the right way. Wildlife rehabilitation is not an amateur hobby. It is regulated and licensed by the state. Call the Wildlife Rescue League.

Dealing with a Nuisance Animal

The best action for avoiding wildlife conflict is preventive. Animal-proof your home or yard. No single action will work every time, and you may have to try several things. Here are some ideas that may keep wildlife away.

Remove Sources of Shelter
Wood piles, mounds of yard clippings, and other vegetative debris can attract rodents and reptiles.

BATS: For such a tiny, gentle, and relatively rare animal, nuisance bats cause a lot of concern. Remember, bats can carry rabies, so use caution. If you have a bat in your house, contact the Animal Protection Police at 703-691-2131. Don’t wait overnight to see if a bat will leave on its own. Some bats can enter buildings in openings as small as a half-inch, so it may take a specialist to ensure that the area is truly bat-proof.

If a bat is someplace people don’t go (behind shutters, in an attic), you can wait for all the bats to leave and then seal the area. If bats are in an area such as the space between your house and shutters, contact a bat specialist. If you try to remove it yourself, you may injure the bat or it may become aggressive. More about bats. Field Guide.

BEAVERS: Beavers are a source of frequent nuisance complaints. They play a key role in Eastern temperate deciduous forests by changing the habitat and thus help reduce the effect of flooding, remove pollutants and sediment from water, and create wetlands habitat for wildlife.

The key to keeping beaver out of an area is to make it harder for them to get food. Wrap the bottom four feet of trees in hardware cloth. Leave enough space between the tree bark and the cloth to allow the tree to grow. Here are three links for more information about beavers: Wildlife/Beaver;  Beaver Facts, printable card;  Field Guide.

DEER: Residents tell us that besides damaging their plants, deer make their dogs “go nuts.”

In many places, there are too many deer for the habitat available. This forces deer into dangerous situations. They may share the road with your car, and they may become more susceptible to disease. Experts recommend an eight-foot tall fence to exclude deer.

The county’s Animal Control Department has a deer management program on public lands. More about deer.

FOXES: Foxes frequent Fairfax County yards, and we’ve had reports of them stealing newspapers, tampering with bird feeders, and just sitting and staring as if to say, “Really? You know if you chase me off again I’m just going to come back later.”

Foxes, like other canines, have an excellent sense of smell. They can be discouraged by strong odors (ammonia-soaked cotton balls or pepper scents) and by proper sanitation. They’ll feed on trash or on the rodents that trash attracts. Learn what attracted the animal in the first place, because removing it might be enough to encourage the critter to move on. More about foxes and a video about foxes. Field Guide.

SKUNKS: Skunks help us by eating insects and rodents, but they smell bad. A skunk burrow under a deck, although not common, can be a rather unpleasant wildlife experience.

Before blocking a skunk’s access to its burrow, first make sure all the animals in the burrow, including the young, are out. Block or screen the entry point to prevent them from returning. Moth balls may prevent skunks from returning home, but don’t leave them out in the open. Place the balls near the opening of the burrow in a weatherproof container with holes to allow the odor to disperse. More about skunks. Field guide.

SQUIRRELS: Squirrels are year-round residents, but that doesn’t mean they stay in one place. Migrations in spring and fall help disperse the young into new areas, which may include attics, sheds, and basements. Squirrels can be common in your yard if it contains their natural food sources of bark, flower buds, insects and nuts. More about squirrels. Field Guide.

WOODCHUCKS: It is usually the burrow, not the woodchuck, that produces the ankle-twisting curses we hear throughout the county.

Woodchucks, or groundhogs, are closely related to squirrels and can climb trees. They’re also very good burrowers. Keep them out of your yard with a fence that reaches 18 inches below ground level. If you know where the animal’s burrow is, you can block its entry points.

There are several resources for help on nuisance animals:

The Virginia Department of Game and Inland Fisheries maintains the legal list of nuisance wildlife on its wildlife web page. The department also provides tips and advice for homeowners. If you see someone committing a wildlife crime, report it to the Wildlife Crime Line at 1-800-237-5712.

Fairfax County’s wildlife biologist in the Animal Control Division of the Police Department can help.

If you have any question whether you may have a rabid or dangerous animal nearby, call the police non-emergency phone number, 703-691-2131.