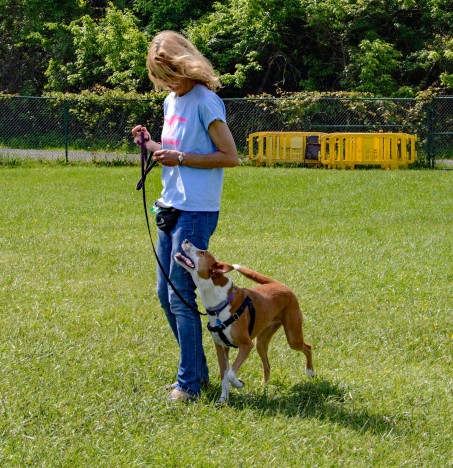 If we only had a nickel every time for that one, huh?

You know the rules and laws about dogs. Have a license. Keep dogs on a leash. Scoop the poop. Those are county and state laws.

Do you know the reasons behind them? Read on. You may learn things that will surprise you.

No matter how well trained a dog is, it still possesses the instincts of a dog. You can’t change that. Dogs will, at some point, react on instinct in ways people simply don’t expect.  Immaculately trimmed and superbly trained dogs have snapped at judges and pooped on center stage at dog shows. Telling yourself and others that “my dog doesn’t do that” is kidding yourself, because under the right circumstances, it will.

Dogs of all sizes will chase animals they view as prey or as a threat to themselves or their owners. Sometimes they investigate out of curiosity or out of a desire to play. We have seen the most mild-mannered, low-key dogs you can imagine bolt with explosive speed and power when a fox trots into their field of vision. We have seen dogs break into sprints when they catch sight of another dog they know, tragically without paying attention to the cars on the street they’re crossing. We know of unleashed dogs that have been bitten by snakes and chased by coyotes. 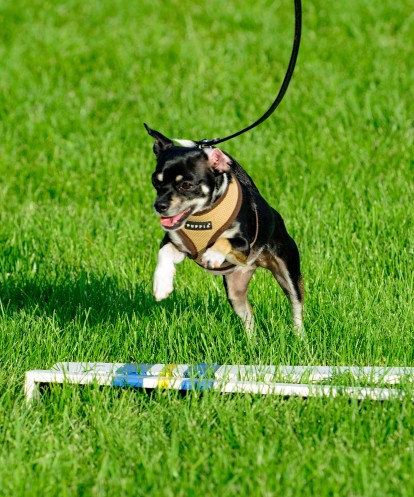 Then there is simple courtesy. No other person knows what you know about your dog, and you can’t assume that other people think your dog is friendly. They don’t know if your dog is trained, or how well it is trained. There are people who don’t like dogs and who are afraid of dogs. You’re spoiling their park visit if they must stop what they’re doing because your dog is moving toward them. Someone else may be walking a dog that is smaller than your dog, and you’re not making any friends if that bigger dog is scaring another dog-walker’s pet.

There are people unfamiliar with dogs. They haven’t grown up with dogs or been around them frequently. They may intend to be friendly toward your dog, but they may do something the dog interprets as aggressive, such as place their face directly in front of your dog’s face. That’s inviting an instinctive attack. You can’t control what other people do around your pet, so you must control your dog to avoid conflicts.

Parks are filled with people of varying sensibilities taking part in different activities, and dogs off leash and running amid other park user activities isn’t neighborly. Without a leash, dog owners can’t restrict a dog’s movement, and some of those movements are risky and end in tragedy or, at the least, irritating inconvenience. We have heard of off-leash dogs returning to their owners for loving scratches and snuggles, and the owner has no idea the dog just romped through poison ivy. That spreads to the owner. Ouch!

And then there’s poop. This isn’t just about people stepping in dog poop, although that certainly is a factor. Someone else shouldn’t have to pick up your dog’s feces with a shoe because you didn’t pick it up with a plastic bag. Not scooping your dog’s poop is against county and state law. But there’s more to it.

A dog off leash is free to defecate in areas that the owner doesn’t see or can’t reach. Wildlife views your dog as a predator, and the scent of your dog’s feces affects wildlife behavior.

Parasites carried by many animals are left behind in feces and can cause diarrhea, stomach cramps, nausea, dehydration, rash, fever, cough, and even vision loss. Bacteria can be transmitted to animals or people who have open wounds or depressed immune systems. Feces wash into creeks and streams, causing contamination issues. Nutrients from dog feces add to weed and algae growth, which reduces water quality and threatens fish and invertebrates. If you or your dog wades into a stream, you have no idea what’s entered the water upstream and, unfortunately, many flowing streams in Fairfax County are environmentally-compromised in some way. The Fairfax County Health Department discourages the use of streams for contact recreational purposes because of potential health risks. A 2014 State Department of Environmental Quality report says that fecal bacteria are the most common pollutants in Virginia waters. Much of that is related to farms, but dogs adding to the problem doesn’t help. The county’s website says there are an estimated 87,000 registered dogs in Fairfax County. Imagine if there were no leash laws for them.

Some of those fecal bacteria problems can be avoided by the simple stewardship act of picking up the poop with a plastic bag. Throw the bag in an appropriate trash can, or flush the poop – not the bag – down a toilet. Water that goes down a toilet is later treated.

This isn’t about writing tickets. It’s about stewardship – caring for your neighbor and your natural resources. The Fairfax County Park Authority welcomes dogs and cats on leash in parks. Walking in a park with a dog is an adventure for you and your pet, and you might see the park through new eyes. Your dog benefits from new smells and socializing with other dogs, and the time together is quality time that reassures your dog about its place in the home pack. FCPA’s off­leash areas are a great resource for exercising your dog in a safe, fenced environment.

In summary, keep your dog and others safe by keeping dogs on leash. Dogs off leash:

Leashes are an easy way to avoid problems.

More info about dogs in parks