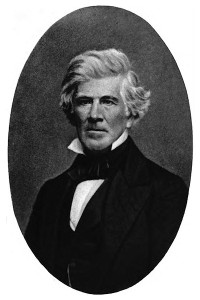 President James Madison fled a capital in flames through the land that is now Riverbend Park, but did you know that there is another park in Fairfax County with a connection to the burning of Washington?

When the British approached the Capital City in the summer of 1814, Lewis Machen was a 24-year-old junior clerk in the U.S. Senate. He had, just a few weeks earlier, purchased his first property. Because he owned land in Maryland, he was released from his office in the D.C. militia, and that freed him to make a critical decision as the British drew near.

Many civilians were either fleeing Washington and seeking safety or joining their militia units on the outskirts of the city. The chaos prevented Machen’s superiors from accessing the Senate, and Machen had received no direct orders about what to do. Taking matters into his own hands, he arranged for the Senate’s archival material to be taken away by a wagon driver he hired. He convinced another junior clerk to help, and together they loaded the most important documents of the Senate into the wagon and saw them hauled away to Machen’s property in Prince George’s County. The wagon journey was not without its interruptions. At one point, Machen had to replace a wagon wheel and, later, the wagon overturned. However, Machen eventually delivered the documents to a secure point. His quick thinking and the ability to take responsibility when needed saved the written records of the first 25 years of the United States.

There’s a historic marker commemorating Madison’s crossing of the Potomac River at Riverbend Park, and after you visit there, follow up with a visit to Lewis Machen’s farm at Ellanor C. Lawrence Park. Although Machen did not live at the Walney farmhouse inside ECLP during the War of 1812, he moved there in 1843 and left his mark. At ECLP, you can follow the trails of history and the story of perseverance in the face of the fire, and you can see evidence of Machen’s ice house, dairy and ice pond on site.

Author Alli Hartley is a historian based at Ellanor C. Lawrence Park in Chantilly.