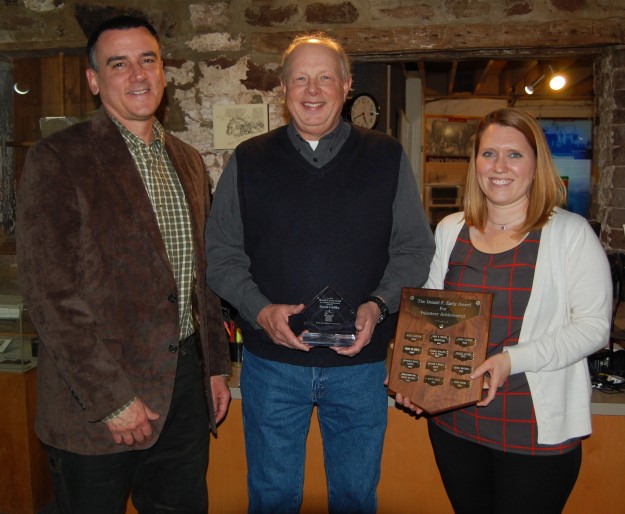 David Gnilka keeps things buzzing at Ellanor C. Lawrence Park (ECLP) — literally. Despite some nasty stings he suffered as a boy while helping his beekeeper father, Gnilka was drawn back to beekeeping in retirement like the bees are drawn back each year to the flowers at the park.

Now a volunteer beekeeper at ECLP, Gnilka was honored in February with the park’s Donald F. Early Award for Volunteer Achievement for his outstanding efforts in caring for the park’s hive and resident bees. So, what’s his attraction to bees?

Gnilka says bees are a “highly socialized insect,” and it can be fascinating to watch them cooperate to accomplish their goals. “There’s a lot of teamwork involved,” he notes, adding, inside a hive, “younger bees are busy taking care of the hive, taking care of the queen, building a new comb, processing pollen and nectar, and taking care of the new brood as they come along.” There’s a lot of labor that goes on that most people don’t get to see. Beekeeping gives Gnilka an opportunity to get that inside peek. “It’s really kind of cool,” he says. “It’s like breaking into somebody’s house, and we do it.”

From a safe distance, visitors to the park may get to see some of the action going on outside the hive. For instance, Gnilka says it’s possible to see younger bees taking part in training flights to orient themselves to the hive. The newbies will fly out 15 to 20 feet at a time and then come back to practice landings until they learn to find their hive. The more experienced foragers take off immediately, going practically vertical in their flight path.

Gnilka got back into beekeeping after signing up for a class through the Northern Virginia Beekeepers Association. The group assigned a mentor to work with him, but after he discovered the hive at ECLP on a visit to the park, he dropped his original mentor and started working with ECLP beekeeper Karen Waltman. He found beekeeping is much more labor intensive today than it was during his father’s era.

“We have a lot more pestilence and disease,” Gnilka says. “We didn’t have the mites that are a big issue. We didn’t have the hive beetles and things like wax moths. The bees are under attack from a lot more things that actually get into the hive.” He notes the bees need constant monitoring, especially in the warmer months when there’s a lot more bug activity.

Much has been written in recent years about the survival problems of bees, and Gnilka says there’s an easy way for Fairfax County residents to help. “Generally, if you just plant more flowers. Plant more vegetables. The bees will travel looking for pollen or nectar. So, if you have space in your yard, plant some flowers or vegetables and they’ll pollinate them for you and you may actually get something out of it.”

Waltman and Gnilka offer bee programs for various ages at ECLP, and Gnilka says the groups that seem most enthusiastic are the young people who get the chance to be a bee and assemble their own hive from boxes. It’s about as “hands on” as the casual visitor can get with bees, he says, because “there’s kind of a limit to the ability to play touchy-feely with bees.”

Gnilka is careful to wear protective gear when he works with the hive, but he does get the occasional sting. Sometimes when he comes to check on the bees he’ll find people getting a little too close for their own good, but he uses those occasions as teaching opportunities to let people know about the ways bees come and go from the hive.

Both Waltman, and now Gnilka, have been recipients of the Donald F. Early Award, which was named in honor of a past beekeeper volunteer at ECLP. Gnilka jokes, “Maybe the bees vote. You get a lot of votes that way.”

Still, he calls this a “really nice award” and hopes the recognition inspires other volunteers. Reflecting on the honor, Gnilka says he’s visited a lot of parks over the years, and his time at ECLP has taught him a lesson. “What I’ve come to learn in this job is that working at the park is not the same as a day at the park. There’s a lot of work that goes into this to make it pleasurable for the people who come here.”

Of course, when it comes to ECLP’s beehive, Gnilka says a visitor’s experience will be more pleasurable if they don’t mess with the bees too much!