The horse stalls at Kidwell Farm are empty for the first time in over 30 years. Jesse, a Percheron draft horse, passed away this past Sunday morning at the age of 35. Frying Pan Farm Park has been the home for draft horses for over three decades, until yesterday. The pastures, paddocks, and horse stalls were no longer filled with the gentle giants.

Jesse was a part of the beloved duo known by thousands as Jesse and Michael and could always be found pulling wagon rides and other antique farm equipment for demonstration purposes. When not working, they would be grazing in pastures with the other farm animals, or standing in their stalls waiting for the next child to be helped up by their parent to reach Jesse or Michael’s face and gently caress them.   Michael passed away two years ago, and Jesse remained one of the farm’s most popular attractions. 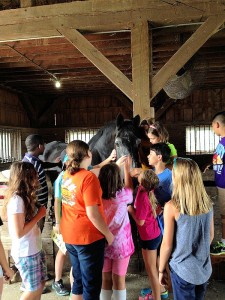 Frying Pan Farm Park’s Kidwell Farm is full of many other farm animals that are visited by hundreds of people daily, but the farm will look a bit vacant for right now without Jesse. Jesse was a wonderful part of Kidwell Farm and will be missed.