Forget raindrops on roses and whiskers on kittens. If you want to connect kids to nature, favorite things might include crayons, clipart and clues. Whether at a camp or a campfire, Thing Bags create learning.

Thing Bags are my favorite interpretive tool. What’s a Thing Bag? It’s a bag. Full of things. Stuff. But this is cool stuff.

A Thing Bag is a collection of objects that represent an aspect of whatever we’re talking about in a park. If we’re talking about owls, our bag may include swim goggles to represent the nictitating membrane of an owl’s eye, a toy tiger to explain owls as tigers of the night, and a slip wrench to depict how an owl’s beak opens wide. We encourage each child at a class to blindly pull something out of the bag and think about how it is similar to what we’re talking about.

Hidden Oaks Nature Center keeps 13 Thing Bags at the ready. We also have additional lists and items that are ready to assemble so that we can create up to 20 interpretive bags. We’ve learned to be flexible with bag contents, and we’ve learned that we can learn along with the kids in a class.

Thing Bags inspire curiosity, anticipation, wonder, and excitement in children, and there are never any wrong answers. A prepared interpreter can spin any answer into an appropriate response. A child may select a neck-tickling party blower from a Frog Thing Bag and then state that a group of frogs is like a noisy birthday party. That works! The interpreter could add that, when blown, the party blower rolls out like a frog’s tongue zipping out to catch a fly. The children may have additional ideas. When pulling out a model T-Rex from a Snake Thing Bag, answers range from “Snakes are scary!” and “Snakes are reptiles,” to “Snakes are carnivores.” Asking everyone to wait for the child whose turn it is to answer first can be a challenge. By inviting each child to have their own turn to speak first, the activity becomes collaborative rather than a test.

During a summer camp on dinosaurs, a Thing Bag can recap an entire Mesozoic era! A Thing Bag can be taken out on a trail. A tip for parents – we often use thing bags as a calming device because they’re instantly popular. Children are willing to join a circle just to see what pops out next as they wait their turn.

Prior to a park program, Thing Bags are great planning tools. Our naturalists like brainstorming items for the bags. Surprisingly, having an actual thing is not critically important. Children love to pull out an envelope and slowly unfold the enwrapped paper containing a graphic. For an earthworm Thing Bag, we use the “No” symbol of a circle with a diagonal line over a cartoon of a hairy leg. Even preschoolers can guess that this means, “No Legs”.

By the time an interpreter has loaded a Thing Bag with clues, the salient points to make about the objects is loaded into memory. Since there is no particular order in which things may be drawn, the program leader needs to be ready with the relevance of the object and ready for different interpretations. 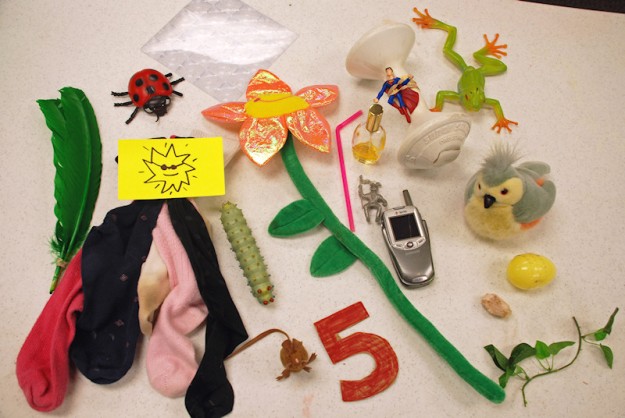 At Hidden Oaks Nature Center, we have successfully used Thing Bags with children as young as four.   As children get older, at about six, they become worried about sticking their hand in a bag. Maybe it is because we have live snakes in the building! We find that by assuring everyone at the outset that no one will get hurt or surprised by reaching into the bag, we quell trepidations. We take volunteers first. The more gregarious children demonstrate the high success and low worry of plunging into a Thing Bag for the cautious who are risk averse. Typically, every child will join in by the end of the activity, and many beg for a second turn. We’ve seen returning campers cheer at the announcement of Thing Bag Time and proudly describe the process to new campers.

In preparing a Thing Bag, we let creativity run wild! We start with a list of characteristics we wish to review and unleash stream-of-consciousness. Once we start connecting meaning to objects, it is hard to stop. It is just the right thing to connect a visitor to a resource.

Here’s an example — our list of 12 items for a Snake Thing Bag:

These are a few of our favorite things.

A version of this story was originally published in the NAI Region 2 publication Chesapeake Chat.

1 thought on “Behind the Scenes: What’s Inside the Interpreter’s Thing Bag?”