If you know me, you know my fascination with Huntley Meadows Park (HMP) the first time I stepped on the boardwalk over the marsh. I thought I stepped in the Everglades as I saw a dozen egrets and heard songs of red-winged blackbirds throughout the marsh. I also saw birds I had never seen or heard before, such as two yellow-crowned night herons and king rails. Another fascination was the amount of turtles resting on fallen branches beside the boardwalk oblivious to people. It was the first time I recognized a wetland and found it hard to believe an environment like this existed three miles from the Beltway.

I lived across the county, but I made many return trips, this time, armed with a camera. I quickly became a boardwalk regular and started recognizing other boardwalk regulars. These people consisted of other photographers, birders, and people who loved walking in nature. I would have discussions on birds or any other animal we had seen, and where to go to see others. Discussions also consisted on photography and sharing images on the Internet.

I encountered two of the boardwalk regulars, Jim Cox and Bill Stetzer, on almost every visit. They both volunteered at HMP as boardwalk nature interpreters. They kept visitors informed of the beaver family residing under the boardwalk at that time. They knew how many were in the family, the location of the lodge, and waited for the beavers to come out as the sun was going down. Sometimes the beavers made an appearance, but most of the time, we would hear them eating under the boardwalk, or the cry of the young. Neither one was a biologist, but they had a lot of knowledge of beavers by naturalists they encountered through the park and their own research. They were very friendly and welcoming to visitors as they shared what they knew about the beavers. I really respected the way they interacted with visitors. I also really loved the park, so I also wanted to play a small role and follow their footsteps. 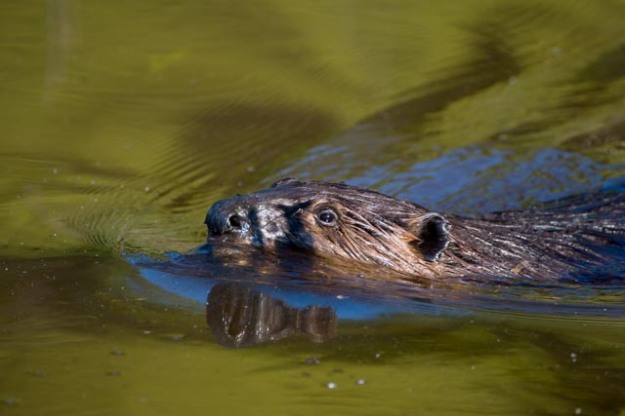 I contacted the park to inquire about volunteer opportunities. HMP staff member Ann (Annie) Stat asked if I would be willing to take the park’s spotting scope to the tower. I confirmed, and met her one afternoon. She provided the scope and walked with me to the boardwalk, setting an example as she socialized with the visitors. She emphasized sharing something that a person might not see. That afternoon, it was a hawk (a red-shouldered, I believe) perched quietly above the boardwalk. Annie presented it to visitors that would have most likely walked past it unaware of its presence.

The requirements for the View from the Tower position were not hard. I had to show up, return on time, and record the number of contacts and bird sightings. I regularly volunteered two Sunday afternoons a month. Volunteering on weekends provided large counts of visitor contacts, especially on nice days. If a scout troop visited, my visitor counts would multiply.

I do not have strong social skills with unfamiliar people. I’m usually not one to start a conversation, but I had my mindset on the way Jim and Bill talked with boardwalk visitors. They did not present the park like salesmen; instead, they would share with people something that would make their visit more pleasurable and fulfilling, which was also Annie’s emphasis.

The visitors I encountered the most were birders. When I first started, I was very familiar with birds I captured on camera, like wading birds and ducks, but I lacked the knowledge of songbirds.   A few birders quizzed my birding skills, but I had my worn copy of National Geographic Guide to Birds with me for assistance.

My birding knowledge grew over the years thanks to many friendly and helpful birders. I learned a lot about different species, migration, what bird you are most likely to see at a certain time, and what comes or leaves when the wetland changes.

I also met great photographers, which has always been a very strong interest of mine. Some were just starting, the way I did when I first came to the park.   I would give them pointers, such as early morning is the best time for pictures because of the sunlight and activity. I also met photographers that had been shooting for years with lens that cost as much as a car. They gave me pointers like aperture settings and exposure.

The visitors I enjoyed the most were people that were unfamiliar with wetlands, the way I was when I first entered the park. For the most part, they enjoyed their walk on the boardwalk. When I invited them to look through the park’s spotting scope at a great blue heron, their interest peaked, especially the young children. If they had trouble reaching the scope, I had them stand on the bench. They had never noticed a large bird with all its feathers, face, and beak in great detail. I would have to work much harder to impress a hardcore birder.

I cannot express how much I enjoyed my time being on the tower sharing the natural events unfolding in front of us. I witnessed many fascinating things, such as spotting an American bittern for a group of people, a painted turtle crawling on the ice, wild turkeys jumping from a tree, a great blue heron eating a turtle during a drought, and an eagle flying off with a carcass half its size.

The past year I met a wonderful lady who has a 12-year-old son, and both are also boardwalk regulars. Their birding skills, especially the 12-year-old, are phenomenal; he is a walking bird encyclopedia. We plan to officially be a family this summer. Although we plan to spend a lot of family time in the park, I can’t get there as much as I could, so I have resigned from the View from the Tower volunteer position.

I enjoyed my time up on the tower, and I highly recommend anyone with good birding skills and who likes socializing with other birders and people who don’t know what they are looking at, to think about this position. You’ll always have an excuse to go to the park, and you will always have an excuse to get out of something you don’t want to do. I can’t tell you how many times I said, “I wish I could go, but I have to volunteer at Huntley.”

Sunday afternoons was a great way for me to wind down from the weekend, and get ready for another week of work (the calm before the storm). Although I no longer officially volunteer on the tower, I will still be making frequent visits and sharing what I see.

A side note: You may already know that HMP has directed me to wildlife and nature photography. I will display some of my work at the Norma Hoffman Visitor Center during March and April of this year. One wall will be strictly images taken at HMP. I will host a reception on March 8, 2015 from 2 to 4 p.m.

Hope to see you there.